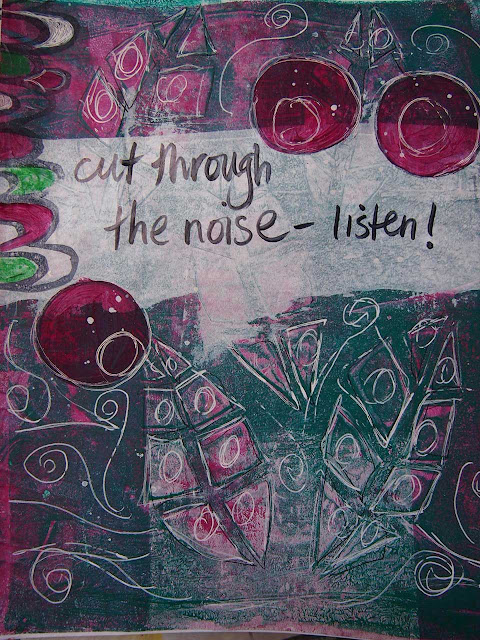 I recently spent a few days in Hobart and was surprised by the amount of white noise that there was when sitting on the balcony of the apartment we stayed in. The balcony looked out over Sullivan's Cove, but on the other side was a main road into the city centre. The level of traffic noise was a lot higher than I'm used to, even though I live just off a main road and within spitting distance of the central business district of Adelaide. There I was, trying to have a bit of quiet time first thing in the morning, and the ambient noise level was interfering.

It made me think about how we tune out the noises we're used to. My studio isn't silent - there is birdsong, traffic, the high-pressure washers of the car dealers opposite - but I'm used to those noises and don't really hear them anymore unless they are unusually loud. The noises in Hobart, however, were of another level, and I was finding it really hard to silence them in my own head.

How often do we tune out something we should actually be listening to? Many times God speaks in a still small voice. How often am I not tuned in, because I'm working so hard at tuning some things out? I need to learn what is just noise and what is important, cut through the distractions and listen!
Posted by Tracy at 20:30

Thanks for dropping by. I read and appreciate all your comments.

Tracy
Hi. I am a woman who is passionate about creativity in all its forms. I love nothing better than enabling people to be released into their creative gifts. Email: tracywoodsford(at)gmail (dot)com Instagram: @sojournertracy

All images and poetry on this blog are my own. It's lovely to share, but please, if you do that, make sure you reference me and link back to this blog. Thank you!